I actually thought Konami would just reveal Zoodiac Malmorat (Ratpier) and troll the community once again. In contrast though they created this monstrosity of a card. 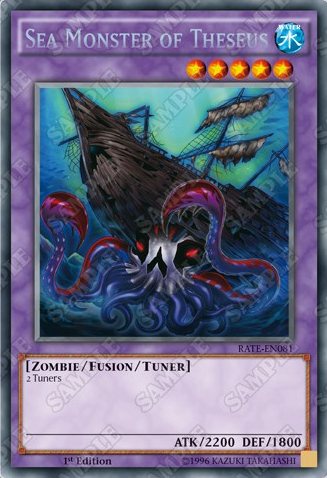 A bizarre fusion tuner monster that requires 2 tuner monsters, Sea Monster of Theseus. So you’re probably wondering what makes a vanilla fusion monster the most broken card of 2017. Well first and foremost, this thing will likely be summoned by Instant Fusion rather by actually fusing tuners. What does this card do? Well like Konami claims in their blog, it creates a lot of options:

Now there is one important thing we can gleam from this card’s reveal. Instant Fusion is safe. They would never recommend make this card Level Five if they didn’t want us to just cheat it out with Instant Fusion (they even recommend in it in their blog post). That being said this likely means Elder Entity Norden will finally die as this card comes to take the place as your new instant target. Of course this doesn’t do what Norden does, but it does open up many new plays.

Is it broken? Maybe. Is it good? It’s definitely a good card. Is it going to warp the format? Probably not, but it will enable alot of cheesy plays.

Speaking of cheesy, there are rumored changes to the rules of Yugioh on the horizon…

Ok so first and foremost, I don’t believe that any of these are true (except for maybe the reprints). I do remember that when Duelist Alliance came out they changed the rules of the game. Players were no longer allowed to draw on the first turn and both players were allowed to control a field spell. One of these rules made going first not broken (until recently…) and the other rule made field spells much more powerful.

As for these new changes let’s analyze them for a moment:

Anyway, that’s the Yugioh news for early 2017. Oh yeah some of the Zoodiac rarities are out. The sad truth is that even if Zoodiac Ratpier is a super rare, the deck will still be expensive…

Alright, I’m out of here.

Thanks for reading as usual. I hope they don’t break Yugioh.